Weight-for-Age (WFA) is a weight allowance which is allocated to compensate a horse for its lack of physical maturity. In theory it allows horses of different ages to run against each other on equal terms.

In practice, the WFA table describes a sliding scale of weight allowances that younger horses receive from older ones, based on the principle that, on average, Flat horses become fully mature at around the beginning of the turf season as 4 year olds, and that young Jumpers are the equal of their older counterparts as hurdlers towards the end of their 4 year old year and, as steeplechasers, approximately one year later.

Race distance is also relevant when taking into account WFA as younger horses are considered to be more disadvantaged in races over longer distances and the sliding scale reflects this. For example, a 3 year old is presumed to be the equal of his elders over 5 furlongs by October. However, a 3 year old running over a mile on the same day would receive an allowance. Similar distance-based factors are included in the Jump scale.

Shown below are the WFA tables for the UK. Each racing nation sets it own WFA scale. With for instance the Irish WFA scale being significantly different to that of Britain.

The tables below specify the scale of weight for age for flat races for any horse which is bred in the northern hemisphere. They show the number of pounds allowance a horse receives at a certain age over a certain race distance. 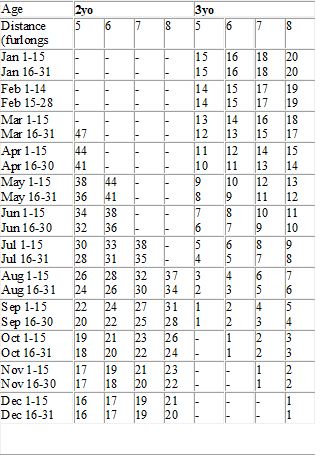 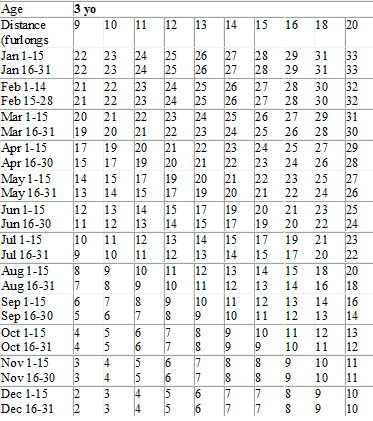 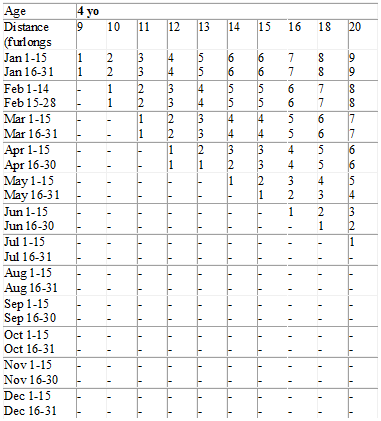 The tables below specify the scale of weight for age for steeple chases, hurdle races and National Hunt Flat Races for any horse which is bred in the northern hemisphere. 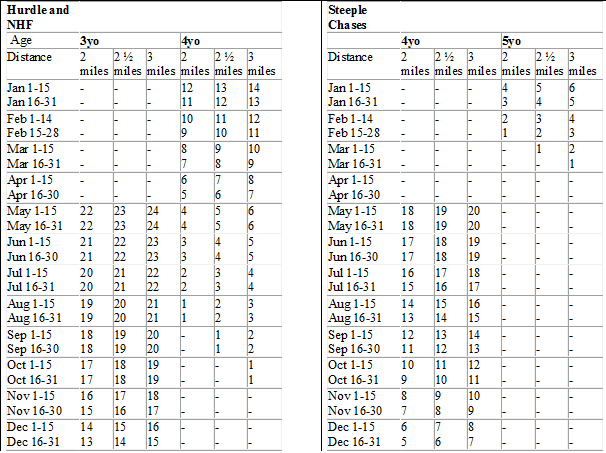 How can we profit from an understanding of the WFA scale? The next page gives some ideas of where anomalies exist in the WFA scale which can be exploited for profit. Weight for Age part 2.